The Futility of Writing About the Last Two Weeks 8 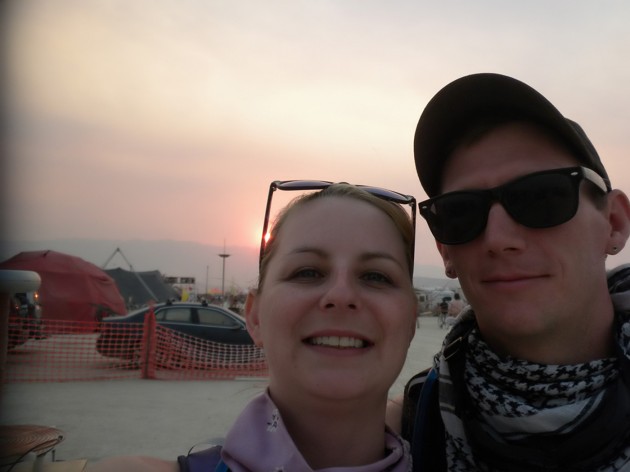 It took a few days for the dust to settle (literally) and for me to attempt to coalesce my thoughts into something, anything, that might be cohesive enough to communicate what we’ve been through. I’ve wasted dozens of Post-its writing fragmentary scribbles, spent hours reviewing photos, and more time staring blankly at this post than I care to admit. The only thing that I keep coming back to over and over is how futile this whole exercise is; how extraordinarily pointless it is to even attempt to put anything into words. It was motivational. It was inspirational. It was mind blowing and eye opening. It was also intensely personal, and I don’t feel I would do any bit of justice trying to describe specific experiences. I’ve always been told a picture is worth a thousand words, but what happens when words fail to properly convey a moment frozen in time?

I’ve never felt more miniscule and overwhelmed in my life than that first night under the Man, and the weight of emotion in the Temple was oppressively palpable. The intensity of it all came crashing down on me at once like a tidal wave rolling over a picturesque seaside village. But then something happened from within that maelstrom just as it threatened to engulf me, and I found I had simply opened myself to it all. I let go. I let go of waiting for things to happen, of being jealous of the experiences of others, of missing out on things, and of forcing things to happen. And that’s the beauty of it all! It’s in that moment you discover that this, life, everything, is a Choose Your Own Adventure book filled with limitless possibilities per page. The only thing that matters is that you participate.

How do you explain the unexplainable, those seemingly unconnected but perfect coincidences? You can’t. I’ve never been one for Churchy spiritualism, but I know Einstein once famously said God doesn’t play dice with the world, and I’ve been fascinated with the dualities of chaos and higher power ever since. There were times out on the playa when I found myself trying to fathom if what was happening was simply the sum total of subatomic particle interactions through space and time or the amalgamation of existence directed by an unseen hand. I recognize now I can and will never know the true answer, I can only accept it as absolute synchronicity.

Thinking back to the moment it registered with me that we were actually leaving, the last words of Roy Batty’s monologue in Bladerunner sprang to mind:

I’ve seen things you people wouldn’t believe… [laughs] Attack ships on fire off the shoulder of Orion, I watched c-beams glitter in the dark near the Tannhäuser Gate. All those moments will be lost in time, like tears… in rain…

Once I left, there was no longer an opportunity to share, as all of it would be out of context and just not make sense. With it all gone now I realize that the memories I have are not really what’s important, they are merely data sets along for the ride of this humble Homo sapiens. What’s important is how these memories shape my interaction with the world around me. The specifics may be lost when I expire and am forgotten, but what I do with them will live on forever.

So in the end I can only throw up my arms in defeat. The desert was hot, San Francisco is an amazing city I want to live in, my friends are awesome, I love my wife, and the experience as a whole has affected me much more profoundly than I ever thought possible.

I can’t wait to go back…

In: Favourites · How To Annoy Me · Life · Random Thoughts · whatever

If I had a camera phone, I would have definitive photographic proof for the internets of a dude driving an SUV around metro-Detroit with an almost-life-sized MANGER SCENE strapped to the roof rack. As I drove by with my mouth open, silently mouthing a giant WHATTHEFUCK, my only question was not WHY? but CAN HE PUT THAT THING THROUGH A DRIVE-THRU?

I can’t make this shit up.

My wife (yes, it’s still weird saying that) is gone for the weekend, and the first things I think of are YES I CAN PARK IN THE DRIVE WAY ALL WEEKEND and SEAFOOD FOR DINNER EVERY NIGHT.

At the risk of making the-most-annoying-song-in-the-world be stuck in your heads for the next 2 weeks, it’s a fucking small world, after all.

Way way back in time (2 years ago) when I proposed to Christa, I bought the domain mattandchrista.com. I had given the name a lot of thought, and conducted weeks of extensive market research for the optimum combination of letters to bring in the most traffic. It came down to two finalists: (1) christaandmatt.com or (2) mattandchrista.com.

In the end I chose what I did because it met my exhaustive domain name criteria:

Interestingly enough, not long after the launch of mattandchrista.com, I began receiving reports that people went to our website, only to find pictures and information of people that weren’t us.

IT GETS CREEPY FROM HERE.

It turns out there is another coupleized Matt and Christa out there, and they purchased christaandmatt.com. They too went to MSU. They too did the long distance thing.
And the really ironic thing that even Alanis would be proud to sing about – Christa met Christa through Comerica. I’m surprised the fabric of the space-time continuum did not instantly explode and burn.

I stopped the live updates from the Cabbage Diet Day 2 because a) it was all starting to sound the same, and b) I had a near death experience from the lack of food. I cracked on the 1st full day and ate a salad WITH DRESSSING! 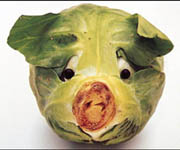 Day 3 dawned full of the prospect of milk & bananas all day, plus the super extra tasty awesome cabbage soup I made. Hell yeah! I cracked by noon and had a Panera sandwich. When I got home at 7pm, Christa was also done with the whole thing. So what would any diet-crazed half-starved human being do? We had Taco Bell.

Christa said she lost 3 pounds by Thursday. I managed to gain 1.
Never again.

8:04am
Just got to work. I’m starving, and I haven’t had a coffee. No one better talk to me or I’ll bite their head off. Trying to stave off hunger pains by eating celery stalks. Who eats celery for breakfast?!

8:53am
I’m still hungry. The celery lasted 20 minutes. How are vegetarians not hungry all the time!!!?

9:21am
Good thing I’m at work. My bowels are very upset with me right now. At least my colon already feels cleaner… Snacking on some grapes now.

10:37am
Some serious mind over matter shit needs to start happening soon. I’ve never been this hungry in my life. I ate all of my celery sticks, baby carrots, and grapes that I brought for breakfast. I’ve drank my entire 1 liter of water.
<sarcasm>I can’t wait for lunch when I can eat cabbage soup.</sarcasm>

1:18pm
The soup is good. It filled me up decently, but I am having this overwhelming urge to raid the vending machine at work. Even the unidentifiable pastry looking green “Lucky Puffs” are looking delicious.

1:44pm
Hungry again. I sent Christa an email explaining how I feel like a starving kid from a third world nation. She was not amused.

3:32pm
There is an eerie calm in my belly right now. I just ate an apple and finished off my 2nd liter of water today. Round 2 of cabbage soup starts once I get home, but for now I’m out of food.

Cabbage ain’t just for the kraut 1

That’s why when I was notified today that I would be taking part in the 7 day cabbage soup diet with Christa, I was less than amused. As a matter of fact, I was a little ticked off.

But, as we all learn sooner or later, marriage is all about compromise. That’s why I’m going to be taking part in the new and improved condensed version of the cabbage diet (since we only have 5 days to do it to “prepare” for the wedding).

We skipped right to day 2 and had a nice salad & baked potato for dinner tonight. I’m in the process of making the soup right now to have over the next few days, and so far I’m pleasantly surprised. I’ve added some extra special seasoning and the soup smells downright good now, though I’m fearing what an update 2 days from now might say.

Please don’t have sex anymore. The sound of your fat jiggling around on the mattress sounds like a heard of elephants jumping on a trampoline about to burst through the floor from down here.
I’ve written a poem:

Oceans of fat cells
Make waves on the bed.
Thumping on the floor.
Do you think no one else hears?
Squeek thump crash thump squeek.
Please don’t have sex again.