This marks the end of the 17 day diet live blog. Not because it has failed (far from it as I’ve lost 8 lbs to date) but because there are only so many ways I can say “damn I’m fucking hungry”…

The I’m Starving Myself Diet – Day 4

Kefir smoothie with blueberries, check. Egg-white omelet with peppers and onion, check. Entire pot of coffee, check. Two baked tilapia fillets, tomato sauce, peppers, cottage cheese, pickle, green tea, pear, side salad, check check checkity check check. Pretty sure I just closed my eyes for a moment and daydreamed of a steak, or a pizza, or better yet a steak pizza, but woke up and all I could find was more celery.

Another morning of kefir smoothie with blueberries, egg-white omelet with peppers and onion, and another morning spent drinking an entire pot of coffee (hey, it’s allowed!) to try to fill the gaping hole in my stomach. For lunch I was able to switch it up with the leftover turkey chili from dinner last night (yay), but then came the infinite 3pm hour and I found myself eating anything and everything from pickles and cottage cheese to celery and peppers with dressing. I even made myself some green tea, and (you guessed it) still hungry. Dinner consisted of a giant chicken breast with some baked asparagus. Two hours after I finished first dinner I was back to eat the other chicken breast I cooked and was saving for tomorrow’s lunch.

Where the hell is all this food going?!

I’ve lost 1lb in 24 hours. I’m not sure how long I can sustain this as constantly being hungry is not very high on my list of things to do.

With 11 days left until DEMF, when C requested we go for another cycle of the 17 day diet before we left, being the good husband I am I said “sure”! This was Sunday, so after spending a few hours at the grocery store stocking up we of course had our “last supper” of pizza, wings, and beer before beginning the diet.

Monday dawned full of possibilities and excitement as I ate an egg-white omelet with some peppers and onion and a kefir smoothie w/ blueberries. It only got better from there with a tilapia fillet with some tomato sauce and a side salad for lunch, a bunch of random shove-in-my-face-as-many-as-I-can fruits and veggies through the afternoon, followed by eggplant parmesan and skillet chicken for dinner. So here I am summarizing day 1, and I’m still going to bed hungry (surprise).

Sure it sounds great, and even tasted great too, but those of you who know me know that even on a good day filled with carb splurges or fried gluttony I’m hungry again within an hour or two (it’s a curse, really it is). I wasn’t going to keep a journal because honestly how many times does anyone really want to read me making reference to staving third world children (remember the cabbage diet?), but here I go anyway!

As many of you know most of my blog writing is inspired by shit that pisses me off. Fortunately for Ozona Grill & Bar, the awful meal they tried to pass off in the guise of “food” was overshadowed by enjoying company with friends celebrating a birthday so they get a free pass. Seriously, if you’re thinking about going there, don’t, and they’re damn lucky that is all I’m saying.

Instead I’ve been absolutely obsessed about writing a GOOD foodie review, and our recent trip to Oddfellows in Oak Cliff for Thursday date night (ie. shit! we’re out of food!) provided the perfect impetus to give it a shot. True to Canadian form, C selected the establishment solely on the fact they have something they called Texas Poutine on the menu, but more on that later.

The restaurant itself sits on the corner of the Bishop Arts food and fashion district featuring large open air windows allowing the outdoor bar/patio seating to merge with the simply and tastefully decorated dining room utilizing natural wood to accent the exposed building structure. I had read that they really take their coffee seriously and that’s evident when you walk in, but unfortunately I was immediately sidetracked by their selection of local craft beer – next time coffee, next time. Since we were n00bs we opted to get several small plates to share and give several different dishes a shot. 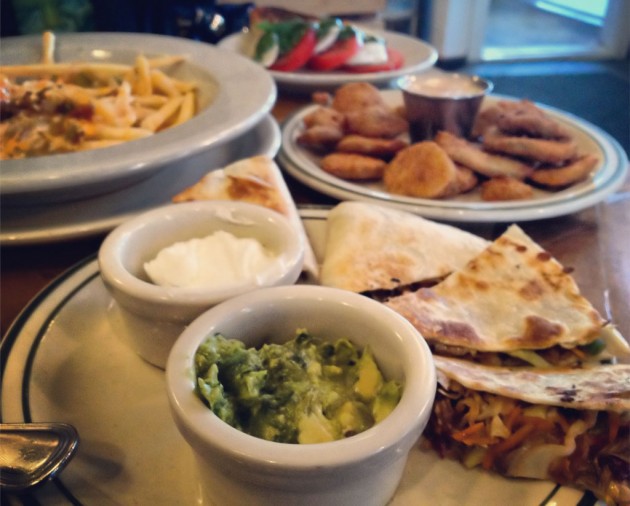 First up was Mac & Cheese that C promptly declared was even better than Slows’ in Detroit (way to set the bar really high there C) – simply prepared with a nicely balanced taste and texture – followed by fried pickles with ancho sauce that were a perfectly flash fried explosion of dill and breading. Next was the much anticipated Texas Poutine. It was good, but unfortunately for us poutine purists did not live up to our expectations and ultimately was fries with bacon, pickled jalapeños, texas cheddar and homemade gravy. Ok who am I kidding I’d still eat it again, but would probably still grumble about the lack of mystery Québécois brown goodness. Next followed the surprise dish of the night, local duck quesadillas – jalapeño-ponzu marinated duck with cabbage and cilantro, and texas mozzarella served with sour cream and guacamole. Mind = blown, taste buds successfully climaxed. Apparently there was a fresh tomato, mozzarella and basil pesto salad that followed, but I was too busy making googlely-eyes at what remained of the duck quesadillas.

The tag line for Oddfellows is “Food For All”; I’m not entirely sure what that means but I’m going to just say “fucking delicious, eat here”. 4 ½ forks 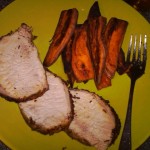 Saw something similar on television a few weekends ago and this sounded good. I can’t for the life of me remember exact measurements, but this recipe easy enough to just whip up on the fly…

Haven’t made a foodie post in a while, so here’s a great summerish pasta dish I made for C which turned out AWESOME…

Farfalle with Broccoli
Adapted from foodnetwork.com.

Bring a large pot of salted water to a boil over high heat. Add the pasta and cook, stirring occasionally. After 5 minutes, add the broccoli florets to the pasta and stir and cook for another 4 minutes. Drain pasta and broccoli, reserving 1 cup of the pasta water.

Meanwhile, in a large skillet, heat the olive oil and butter over medium heat. Add the garlic, anchovies, and red pepper flakes and cook for 5 minutes. Add the broccoli, pasta, salt and pepper and toss. Add some of the reserved pasta water, if necessary, to make a light sauce. Transfer to a serving platter and sprinkle with Parmesan. 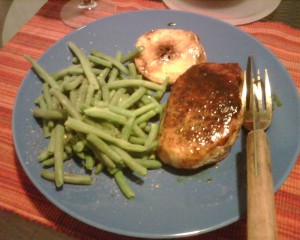 We went to Costco this weekend and stocked up on some meat to freeze and use for dinners over the next month or so. I picked up some absolutely GIGANTIC filet mignon steaks for $6.00 each, and with a couple fresh veggies and other items on hand, I threw together this delicious dinner for the 2 of us for under $18. 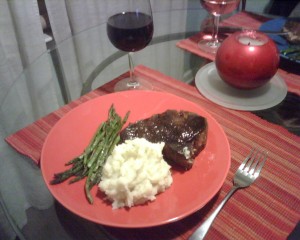